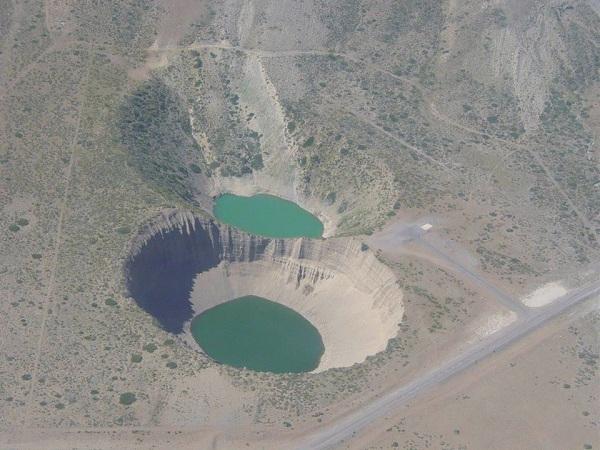 Malargüe has tourist attractions of a great value, some of them are:

*Cascada of Manqui-Malal, which is located to about 35 kilometres of the city of Malargüe. It is a formation of marine origin, with a 29-meter waterfall, fed by the streams from the place, which cross the zone. This place has a great palaeontological interest, where it is possible to see some fossil remains.

*Reserva Provincial Payunia, it is 200 kilometres from the head city of Malargüe. This is one of the most important reservations of volcanoes of the planet. Its history began thousands of years ago, when in the area rained lava and a river of 185 kilometres was formed. The column of smoke from the Chilean volcano that had erupted was 30 kilometres high, and the ashes reached several provinces of Argentina, and even Uruguay. According to studies of volcano experts, there is an average of 10.6 volcanoes per 10 square kilometres, among which the Payún Matrú, the Payún Liso, and Santa Maria stand out. The visit to this reservation will present you a desolate landscape that varies between the red and black colours, where you will experience the silence and the local culture, in the hospitality of the Gaucho hosts who will offer you the best Argentine goat.

*Pozo de las Ánimas, it is located only 6 kilometres from the Valley de Los Molles on route 222, reason why it an extremely accessible tour destination. It can be visited all year long. It is ideal for taking photography since it presents manifold facets according to the season of the year and the hour of the day in which it is visited. It is a geomorphologic singularity denominated karstic doline, which is seen like two great depressions with fresh water bodies in its interior. When the wind strikes the surrounding areas, it makes a special low whistle. This sound is responsible for the origin of the legend that gave its name to this peculiar and beautiful formation. Several legend transmitted by the old settlers are full of superstition. The natives used to denominate the Trolope-Co that means water of the dead or water of the clamouring souls. Another legend indicates that a pioneer from the place, expeditionary of the desert, after a campaign established himself in the zone. It is said that one day, observing the farm ways, he saw a great gust of dust that covered the property completely. After a very loud roar and a tremor, the bulls had disappeared. Thus, a deep depression was created in the place, originating the Pozo de Las Ánimas. The tradition tells that this is the place where people go to pray and cry for the souls that wander in pain in the mountains.

*Volcán Mala Cara, it is to only 35 kilometres South-eastern of the urban centre of Malargüe and is 1800 metres high. Its name comes from the similarity with the stained face of the malacara horses, whose denomination derives from the linguistic custom of the country people. Product of a characteristic hydro-magmatic eruption, it is a natural beauty. These manifestations occur when lava ascends and encounters accumulated water underground, generating eruptions of extreme violence.
The contact of the lava with the water caused that the minerals oxidized and gave in addition to the black, other yellowish, reddish and green colours to the pyroclastic formations. Nowadays, the volcano has been eroded by the rain and the wind, which leaves open some great galleries with mouths of almost 30 metres of height, by which the excursions enter. During the tour, an important recognition of native fauna and flora is made.