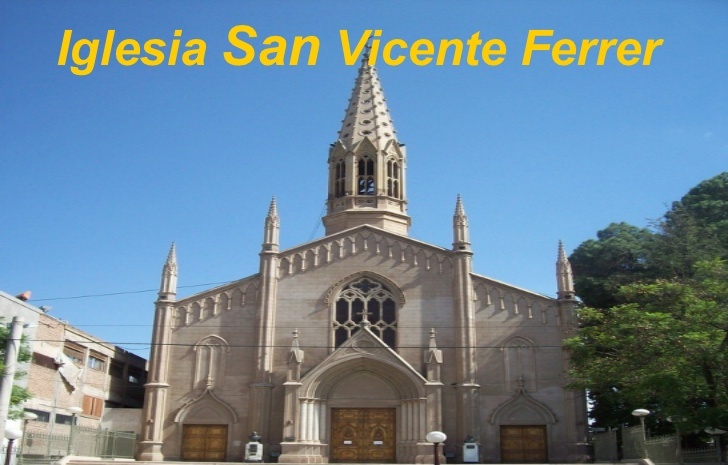 * Plaza Departmental
It is Located downtown Godoy Cruz, in this space there is the Monument to Don Tomás Godoy Cruz. Around there is: the City Council, the Mail, numerous banks, the Police Station and the Civil Registry, the St. Vincente Ferrer Church, the Cine Plaza, traditional pharmacies and many shops. It was entirely renovated in 2001, preserving all tree species. There should be emphasised the installation of a central water fountain, new flooring, benches and lampposts.

* Monument to Dr. Tomás Godoy Cruz
He is the civil patron of the department. It is located in the center of the community square.
The foundation stone was laid during the celebrations of the First Centenary of the Revolution of May, in the year 1910 but it was inaugurated in 1924.

* St. Vincente Ferrer Church
It is a beautiful ancient temple in a Gothic style. This church has had different locations before, but after the earthquake of 1861, the neighbours organized themselves to construct a new temple. The present building began to be built in 1906 at the place where it is now, and it was inaugurated on May 19, 1912, as recorded in reminder plaque of that time. On the west side of the church lies the traditional grotto of the Virgin of Lourdes, where the devotees come to pray.

* The Tomb of Dr. Tomás Godoy Cruz
The remains of Patricio of the la Independencia have been in the Parrroquia de San Vincente Ferrer since 1966.

* Bust in Tribute to Tropero Sosa
Also in the building of St. Vincente Ferrer Church a bust has been built in memory of Don Pedro Sosa. This patriot was born and died in Godoy Cruz, pledged allegiance to General San Martin in 1816 and promised to do a trip to Buenos Aires with his troop of carts in order to bring arms and equipment for the Army of the Andes. Those trips from our province to the capital used to take around 90 days because the roads were just very hilly trails, which was an addition to the danger of attacks by the Indians or robbers. The Trooper undertook this journey in just 45 days, and this feat was widely recognized by the General and all the people in Mendoza.

* Police Headquarters
Along with the parish, the Police Building and the Civil Registration form the visually more distinctive and attractive corner, for their imposing presence. Inaugurated seventy years ago, the 7th Police Station maintains its style, elegance and strength, especially in its clock tower, the only existing one on the public areas of the Department. It has been declared a building of architectural heritage value.

* The Building of the Honourable Deliberative Council
It is the oldest public building in Mendoza. Its construction dates back to 1889 and was done by the best professionals at the time, using materials and construction systems of excellent quality. It has an octagonal shape and frames on the facade typical of the time. At the beginning, it was the Palacio Municipal de Belgrano (name that the Department of Godoy Cruz was called at the time). Soon it became the Directorate of Culture, and finally, the headquarters of the Honourable Deliberative Council of the Department.
Its final restoration began in 1990, respecting the original architectural style and even painting in Venetian red, which it had been originally. The completely restored building was inaugurated on 11 September and 1991 and was declared an Architectural Heritage Department of.