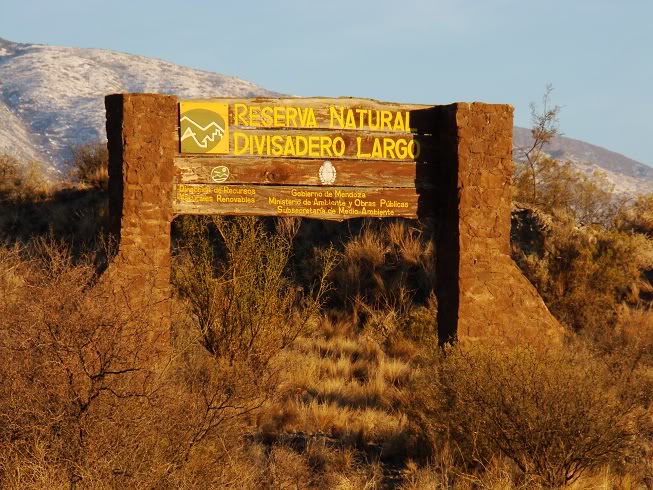 * Potrerillos
By accessing the north coast of the Reservoir, from countryside of the territory of Las Heras, you may discover a landscape with a different perspective, the mirror of water and the majesty of the Cordon del Plata.

* Cerro Arco
Through a gravel road, it takes 30 minutes by a four wheel vehicle, or through a hike of medium difficulty you will be able to access the point of departure of the paragliders and hang-gliders who find this point, because of its natural features, the best place in the country to practice these sports.

* El Challao
It is located 5 minutes from the city of Mendoza, there you can enjoy various activities: paraglide and hang-glide flights, climbing and rappelling, tours by horse, bicycle or on foot, alternative for the nightlife recreation in the discos, and in the drive-in movie theatre, in addition to the incomparable view of the city.

* Campo Histórico.
In this place that revolves around monuments and sites associated with the libertarian campaign of San Martín there are traces of the history of our country. Built in the early nineteenth century, it has an area set to rescue, through the constructions, furniture and apparel, the spirit of the era in which soldiers, officers and militiamen of our land were preparing the Liberation Army.

* Reserva Divisadero Largo
Located 8 kilometres west of the capital, with an area of 492 hectares, it is part of the group of protected natural areas of Mendoza. It was created in order to preserve the colourful rock outcrops which present fossils of animals and plants of more than 200 million years. It offers various alternatives for trekking. Another option is the historical route in the mine “La Atala”, the deposit used to extract the gas once used in the public lighting of the city, a faithful witness of the provincial past.

– Tambillos.
Located in the north of the village, it represents one of the greatest treasures, considering that as well as the remains of buildings, there have been found elements of the Inca culture, such as ornaments, arrowheads, as well as the finding of territories that former indigenous inhabitants used to call “Chenques” (cemeteries).

In Tambillos there is an area that was identified as “Chenques Pichu Wentru” (the children’s cemetery), which origin was possibly due to the massive deaths of children suffering from an epidemic.

– Ranchillo.
These are prehistoric Relics, located 3 kilometres from the head town of Uspallata, where there are many holdouts, rooms and different sectors with walls of up to one metre in height made with the “pirca” system (piled up stones).

– Mirador del Camino del Inca.
Within the building of Ranchillos, has been built an observation ramp that allows people to contemplate the Inca imperial route of communication, trade and conquest almost entirety. It represents the southernmost point of the Inca expansion, the path of the Incas has left in its wide spread, many vestiges of the past which today are very important archaeological treasures.