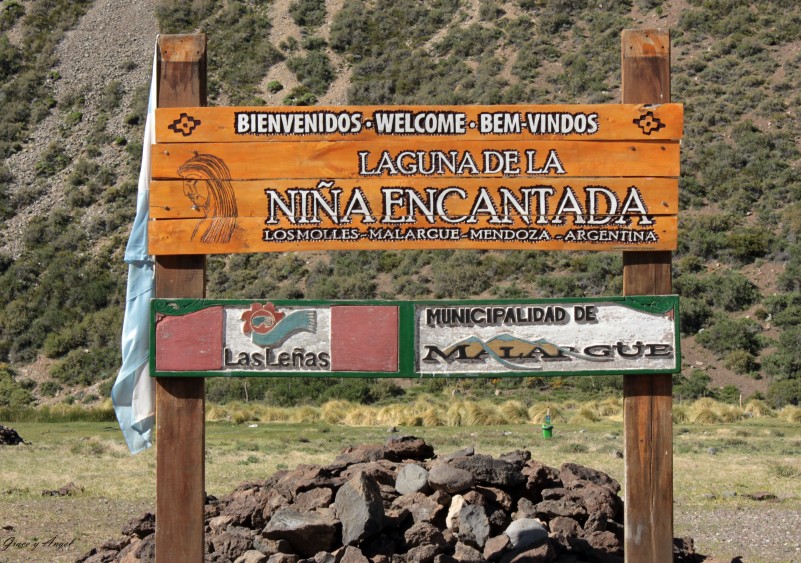 *Laguna of Llancanelo, this natural reserve declared RAMSAR site by the international environmentalist community due to its high ecological value, is located to about 75 kilometres from the head city of Malargüe. It is acceded by the route 40, and then going southwards by route 186. This wet land hosts the greatest amount of birds in South America, such as flamingos that make theirs nests by the lake. It is the ideal site to do bird watching and photographic safaris.

*Caverna de Las Brujas is located in the Moncol Hill, 1831 metres above the sea level, 9 kilometres from the Bardas Blancas. It has as indescribable beauty in its interior, with stalactites and stalagmites, peculiar shapes formed through the millennia. The visits are strictly controlled, reason why it is necessary to book a turn, in the tourist information centres.

*Los Molles are 55 kilometres away from the Malargüe capital. There are open all year long. There is a Thermal Complex that was one of the first tourist attractions of the department with ski tracks and hot springs. Their hot spring baths offer two therapeutic varieties, iron and sulphur pools.

*Valle Hermoso, it is in the heart of the main mountain range, furrowed by the rivers Cobre and Tordillo, to the west of Los Molles and 20 kilometres from Las Leñas.
Its singular beauty allows the practice of different tourism activities such as adventure, nautical and fishery. It is possible to visit it only during the summer.

*Castillos de Pincheira, they are located 27 kilometres from the city of Malargüe. This formation of singular landscape, similar to an immense castle constructed by the erosive action of the climatic agents, has its name due to the well-known caudillo and bandit José Antonio Pincheira, since it once served as refuge for his acts of looting.
In the area near the Castles rest of ceramics, arrowheads, bead necklaces and other vestiges of the indigenous culture were found.

*Laguna de la Niña Encantada, located to about 6 kilometres from Los Molles, it is acceded through a dirt road by the Elcha Bridge (pedestrian) from Route 222; it is surrounded by volcanic lava remains; it has generated a series of legend and rites. At first, it was thought that it was a volcanic crater; soon, the scientific studies determined that this geologic formation corresponded to a phenomenon denominated karstic cenote originated by the transformation of the underground gypsum deposits. By effect of filtrations and the phreatic waters, enormous caverns were formed underneath the surface; that’s why pieces of land have been slowly sinking, causing a constant appearance of the characteristic cones. This attraction can be visited all the year long, and in its surroundings, it is possible to go trekking and horseback riding.

*Valle de Las Leñas is located in the northwest of the Department of Malargüe, in the homonym valley. It is one of the most important ski and snowboard resorts in Argentina and in the Mountain range of the Andes. The base is 2240 metres above the sea level, and the summit is 3430 metres above the sea level. Those characteristics make it the highest ski resort in Argentina. The average of annual snow precipitation is 6 metres on the base, 8 metres on the intermediate level and 10 metres on the summit. There are 13 lifts that allow visitors to accede to 27 ski and snowboard trails divided in beginners, intermediate, advanced and experts. In addition, it has the longest uninterrupted slope of the country, with 7050 metres connecting the trails Apolo, Neptune and Venus. The total ski area is 65km. There is a terrain park of 1500 metres with jumps and different jibs.