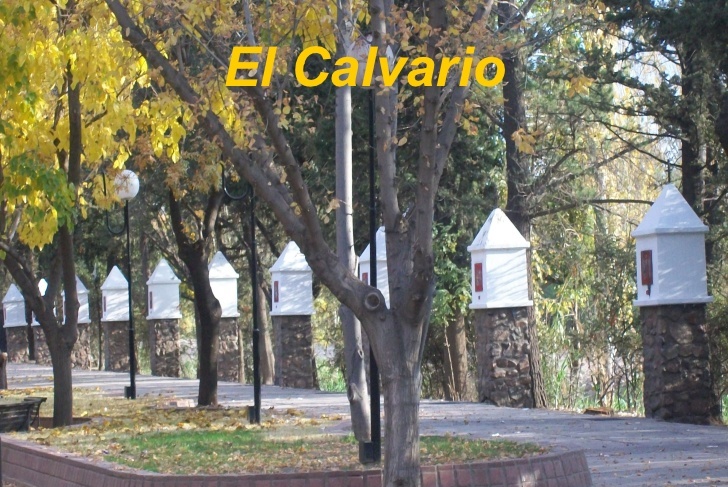 * Plazoleta Batalla del Pilar – A monument in honour of Francisco Narciso Laprida.
A few blocks from the current departmental square there was the called Batalla del Pilar (Battle of Pilar), in September 22, 1829, between unitary and federals. Among the patriots involved there can be named the young Domingo Faustino Sarmiento and Francisco Laprida, President of the Congress of Tucumán, who was killed in the battle. In that site long after is built the Batalla del Pilar District, in whose square stands a monolith with the bust of the eminence. Since 1976 it has been considered a national monument.

* The Calvary
The Calvary of Carrodilla has become a religious center which is permanently attended by a large number of worshippers.
It was founded by the Franciscan priest Francisco Aymont who, expelled from Spain, made the promise to build three calvaries in remembrance of the Passion of Christ in Mendoza, La Rioja and Catamarca.
During the Easter, there is the traditional blessing of the olive branches and the devotees follow the stages of the Calvary. Construction of latter dates from 1844, and it was remodeled in 1996. Nowadays its declaration as a Godoy Cruz Heritage piece has been analysed.

* Cine Teatro Square
This Cultural Center develops various activities such as performances, film projections, workshops, etc. The Directorate of Culture and Cultural Extension annually programs its intense and varied activity. It has been declared Cultural Heritage of the Department.

* Green Amphitheatre “Luis Menotti Pescarmona”
Located at the corner of Balcarce and Rivadavia streets was initially a sector of the Railway sheds. Nowadays it is a place for recreation, meetings and celebrations of various important events, such as the Departmental Feast of the Harvest.
It is surrounded by gardens; it is a further contribution to urban green areas in the department centre.

* San Vincente Park
It is consisted of 19 hectares of gardens that have been preserved and restored at the place where the former municipal slaughterhouse used to be; it constitutes another important green lung of Godoy Cruz.

* Chapel of Our Lady of Schoenstatt
It is located in a privileged position; it has an excellent panoramic view of the city and the mountains. It is surrounded by beautiful and well-kept gardens. In its small interior there is the Our Lady of Schoenstatt altar carved by artisans, framed by beautiful stained glass panels. In the basement can be seen the documentation and images of the work of Father José Kentewich.

* Escorihuela Gascon Winery
It was founded in 1884, a fire destroyed its facilities and it had to be rebuilt. It represents an exponent of the past and progress of Godoy Cruz, in its surroundings, you can see beautiful barrels, and there is an art and tasting room where there are exhibitions and cultural events. This winery has been declared of great departmental interest.

* Public Municipal Library
It is a library of clear humanistic tendencies and it depends on the Department of Culture of the City. It offers material for students of the four levels. In addition to complying with its information service for 12 straight hours a day, there are several librarian extension activities: mobile libraries, storytelling sections, workshops for teachers, literary workshop, printing of leaflets on the department history. In addition to books, there is a collection of magazines (archive), videos (video library), CD, and audio-visual material about local issues.
It is located on Azcuénaga street, 73.

* Mendoza Provincial Hippodrome
The Mendoza Jockey Club was created as an institution in 1945. The province Hippodrome was inaugurated in 1949 and took the name “St. Ignatius.” There usually are many important events such as “The Harvest Classic Grand Prix” and “the Patron Santiago Turf Classic.” It is located on Montes de Oca street.

* Casino Provincial de Mendoza
It is located on the corner of San Martín and Brazil streets.